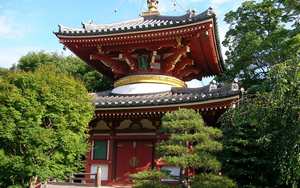 Anraku-ji Temple is the sixth of the 88 temples of the Shikoku pilgrimage. Anraku-ji means Temple of Everlasting Joy There is a Shukubo (accommodation) for over 400 years with an onsen. The honzon (Yakushi Nyorai) was carved by Kobo Daishi himself. The current Hondo was rebuilt in concrete after being destroyed by a fire in 1955. In the main gate, tehre is a Tsuyado too.

The Anraku-ji temple was founded by Kōbō Daishi in 815 where he discovered a hot spring (onsen) with healing powers. The place was called Ekiroji and at a time when pilgrims and travelers had few places to sleep, Ekiroji was the first temple to practice accommodation. The current situation of the Anrakuji Temple would differ by one kilometer from Ekiroji. It was rebuilt on the current site after being completely destroyed by a fire during a war. 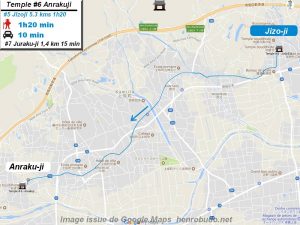 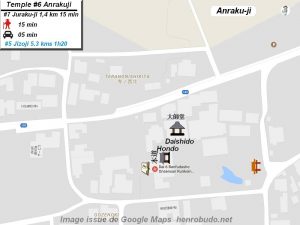 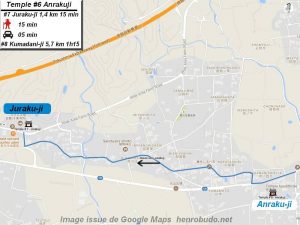 Path to the next Temple #7 Jūraku-ji The main door. On the first floor is the Tsuyado, a free site that can be used by Aruki henro.

The Anrakuji Temple has a traditional temple accommodation (Shukubo) but also a free space (Tsuyado) for walking  pilgrims (aruki-henro)  which has the distinction of being located in the main gate.
The Tsuyado has electricity and you will find blankets.